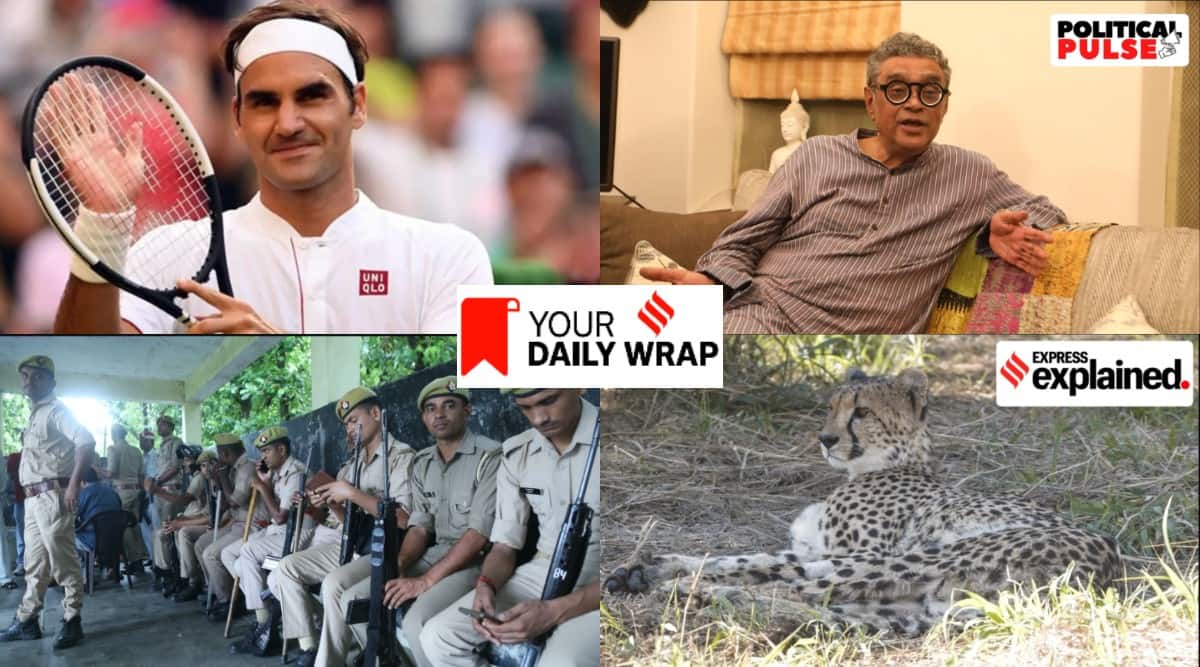 The big news today from the world of Sports: Tennis legend Roger Federer has announced his decision to retire from the sport. In a post on Instagram, the 41-year-old Swiss, who has won 20 Grand Slam titles, said his farewell event will be the Laver Cup in London next week. “I am 41 years old. I have played more than 1,500 matches over 24 years. Tennis has treated me more generously than I ever would have dreamt, and now I must recognize when it’s time to end my competitive career. The Laver Cup next week in London will be my final ATP event. I will play more tennis in the future, of course, but just not in Grand Slams or on the tour,” Federer said.

A day after two minor Dalit girls were found hanging from a tree in Uttar Pradesh’s Lakhimpur Kheri district, the police today said the girls were allegedly raped and strangled before being hanged. They added that six accused were arrested and charged under the sections of Protection of Children from Sexual Offences (POCSO) Act, 2012. One of the accused was caught following an encounter, the police said. The family members of the girls have sought death penalty for the accused. Meanwhile, a political storm has erupted, with the opposition parties hitting out at the Yogi Adityanath government over the law and order situation in the state.

Meanwhile, in the national capital, the BJP released a video of yet another “sting operation” against the Aam Aadmi Party, alleging that an accused in the liquor scam can be heard saying that the now-scrapped excise policy was formulated in a way that a select few got benefits. In response, Deputy CM Manish Sisodia said if the allegations against him are correct, the CBI should arrest him by Monday, if not, “the PM should apologise to me for this fake sting by Monday.”

The Congress launched a scathing attack on the Trinamool Congress, CPM in Kerala and the Aam Aadmi Party, holding Mamata Banerjee “singularly responsible” for the rise of the BJP in West Bengal and alleging that the CPM and BJP were two sides of the same coin in Kerala. The party said it was ready to work towards Opposition unity if there is a need for it, but argued it cannot have such a deal with parties intent or hell bent upon weakening the Congress, in its words.

Former Rajya Sabha MP Swapan Dasgupta was among the BJP leaders who received injuries as partymen clashed with police in an effort to organise protest marches in Kolkata on September 13. He speaks to The Indian Express on police action during the protest, the prospects of the BJP in the state, and why corruption will be an issue in the coming polls. Edited excerpts here.

A modified passenger B-747 Jumbo Jet will take off from Hosea Kutako International Airport in Windhoek, Namibia, for Jaipur tomorrow. On board will be eight Namibian wild cheetahs, five females and three males, the founders of a new population in Kuno National Park, Madhya Pradesh. They will be released in specially erected enclosures by Prime Minister Narendra Modi on Saturday. As the stage is set for the return of the cheetah, a look at the challenges of translocating wild animals across continents.

Edtech major Byju’s clocked a revenue of Rs 2,428 crore in the financial year ended March 2021, far below its own projections. Its losses in the fiscal rose 17-fold to over Rs 4,500 crore as the start-up disclosed its financials for FY21, following an 18-month delay that also attracted government scrutiny. How have Byju’s acquisitions fared, and how has the new revenue recognition impacted the Edtech startup? We explain.

After BCCI vs Supreme Court, it’s back to status quo