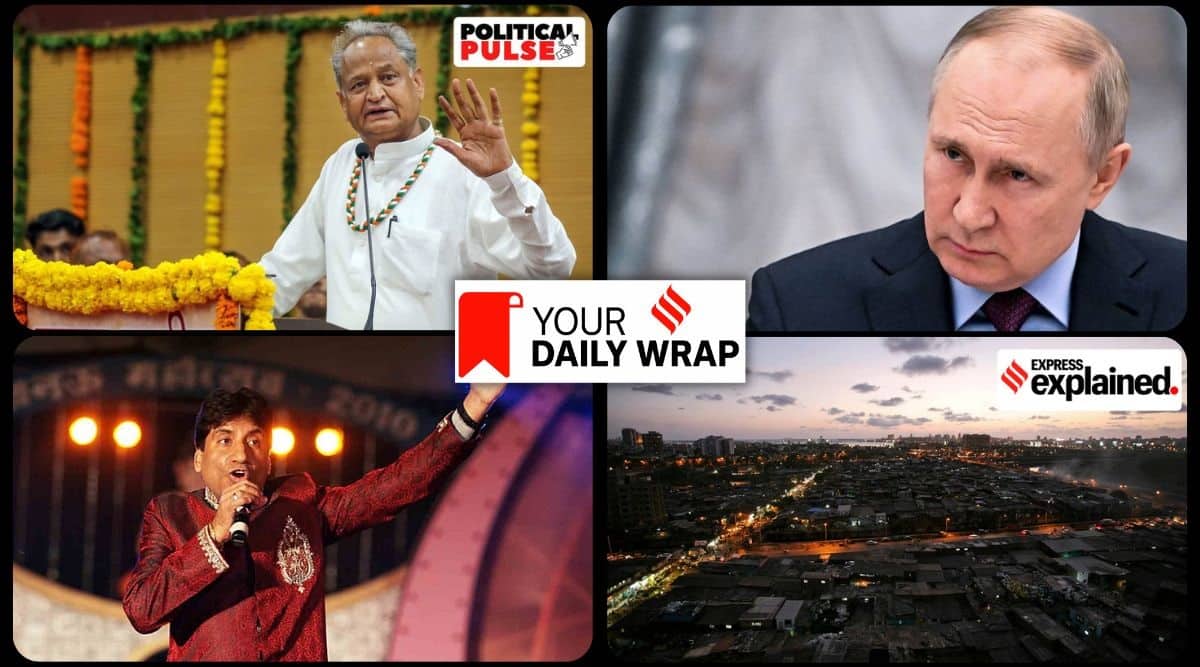 Rajasthan Chief Minister Ashok Gehlot today said he will contest for the post of Congress president if the leadership asks him to do so. He also made it amply clear that he wants to continue as CM in the state. Asked specifically whether he will remain CM, Gehlot said: “Time will tell… But I would like to be in a place where my presence benefits the party… wherever I am… one post, two posts, three posts, or without any post.

The Central Bureau of Investigation (CBI) today arrested the founder-chairman of ABG Shipyard Limited, Rishi Kamlesh Agarwal, in connection with an alleged bank fraud of more than Rs 22,842 crore. The CBI had booked Agarwal, a former chairman of the company, and others for the alleged offences of criminal conspiracy, cheating, criminal breach of trust and abuse of official position under the Indian Penal Code (IPC) and the Prevention of Corruption Act.

The Gujarat Special Investigation Team has filed a chargesheet against Mumbai-based activist Teesta Setalvad, retired DGP R B Sreekumar and former IPS officer Sanjiv Bhatt in a case of alleged fabrication of evidence in relation to the 2002 Gujarat riots. Setalvad was released on bail on September 2, while Sreekumar, who has been in custody since their arrest on June 25, has moved a bail petition before the Gujarat High Court which is due to be heard on September 28. Bhatt is already lodged in a Palanpur jail, convicted in a custodial death case of 1990.

President Vladimir Putin announced a partial mobilisation in Russia as the war in Ukraine reaches nearly seven months and Moscow loses ground on the battlefield. In a televised address to the nation, Putin also warned the West that “it’s not a bluff” that Russia would use all the means at its disposal to protect its territory.

Actor-comedian Raju Srivastava died today in Delhi. He was 58. Srivastava had suffered a cardiac arrest while working out at a gymnasium in the city last month, and was admitted to AIIMS hospital where he underwent angioplasty. Born in Uttar Pradesh’s Kanpur, Srivastava had entered politics in 2014 when he was offered a ticket by the Samajwadi Party. A week later, in March 2014, Srivastava had joined the BJP in the presence of then party president Rajnath Singh.

A five-term MLA from Aonla in Bareilly district, Dharmpal Singh has been a minister in the governments of Chief Minister Kalyan Singh (BJP) and Mayawati (when she headed a BSP-BJP government), and served as general secretary and vice-president in the BJP. In the previous Yogi Adityanath government, Singh was inducted as Irrigation Minister. Apart from Minority Welfare, Muslim Waqf and Haj, Singh holds the portfolios of Animal Husbandry and Dairy Development, Political Pension and Civil Defence. He speaks to The Indian Express on the survey of madrasas being conducted by the UP government and the menace of stray cattle. Read edited excerpts here.

The Tata Group is set to commence the process of consolidating its entire airline business under a single umbrella — the Air India brand. The company has an indicative time limit of wrapping up the process by 2024. How many airlines does the Tata Group own? What is Tata’s plan for merger? Read here.

The Maharashtra government on Wednesday gave the go-ahead for fresh tenders in the Dharavi redevelopment project, almost two decades after it was first proposed. We explain what the project entails, its importance, and why it has been delayed so far.

Pratap Bhanu Mehta writes: From Leicester to New Jersey, the diaspora is reflecting the divisions of Indian politics

Raju Srivastava breathed life and humour into the mundane

Objection, Your Lordship — Why the Supreme Court roster is key to justice

Ratan Tata now PM-CARES trustee, here are the other members