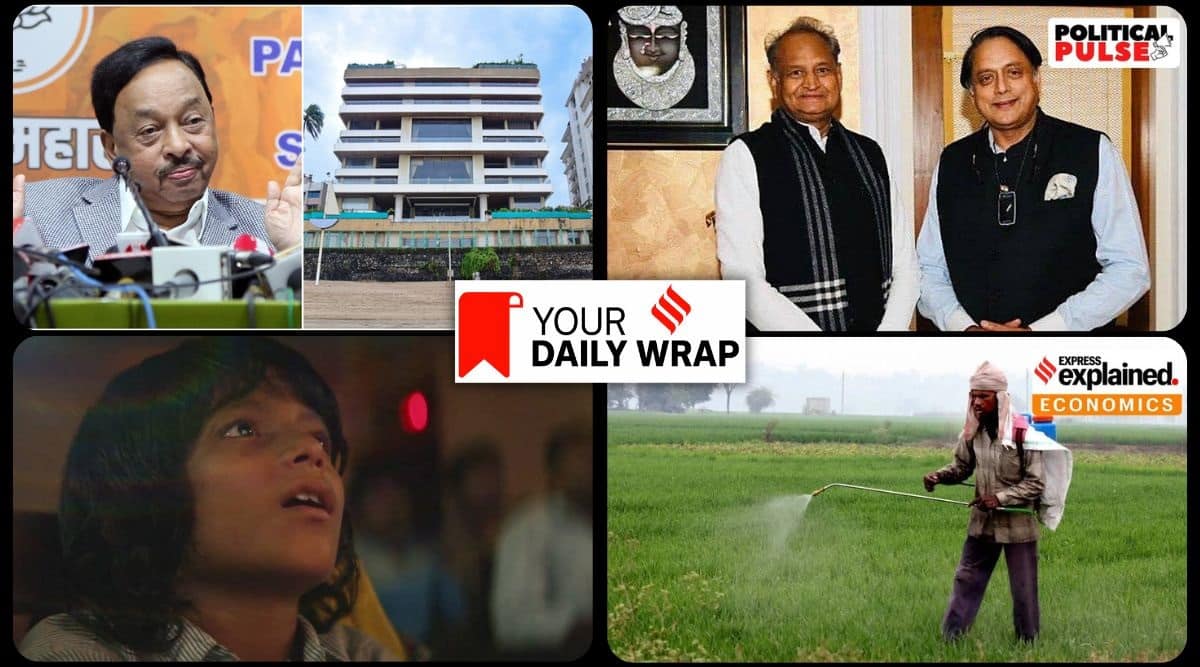 On the face of it, there is little in common between Rajasthan Chief Minister Ashok Gehlot and Lok Sabha MP Shashi Tharoor, the two leaders who could face off against each other if the Congress president election does indeed go into a contest. However, both the 71-year-old Gehlot and the 66-year-old Tharoor bring qualities to the table which the grand old party, struggling to shake off its existential crisis, needs. Gehlot has formidable organisation experience, Tharoor has virtually none; Gehlot is seen as entrenched, Tharoor an outsider free of party’s baggage.

The Bombay High Court today directed the Brihanmumbai Municipal Corporation (BMC) to demolish unauthorised portions of Union Minister and BJP leader Narayan Rane’s eight-storey bungalow in Juhu. The BMC had first inspected Rane’s residence in February this year to take measurements and determine illegalities, if any. Subsequently, on March 4, it issued a notice to Rane pointing out multiple changes of use on all floors of the building without an occupation certificate. The demolition is likely to be carried out on each floor of the bungalow, except the seventh floor. The order is seen as another setback for Rane and a new chapter in the bitter feud that he has been involved in with the Uddhav Thackeray-led Shiv Sena for 17 years.

Aam Aadmi Party (AAP) national convenor and Delhi Chief Minister Arvind Kejriwal, who arrived in Gujarat’s Vadodara today, said the BJP “threatened owners of 13 venues” that the AAP was trying to book for a party event in the city. Stating that the BJP was resorting to “gundagardi (hooliganism)”, Kejriwal also said that the AAP, unlike the BJP, will enforce prohibition in Gujarat without allowing illicit liquor trade. Kejriwal also said that the AAP will continue to uphold the law of prohibition of alcohol in Gujarat if elected to power.

A ‘cursed stone’ or ‘Mountain of darkness’? In Express Research this week, Adrija Roychowdhury tells why the Kohinoor never really impressed the British, or their monarchs. Read here.

How I escaped Ukraine: The ordeal of an Indian medical student

Reservation for Muslim, Christian SCs: Why a new commission when the old one was ignored

While the Congress’s Bharat Jodo Yatra led by Rahul Gandhi has been moving ahead through the southern states now, a march of the Adiwasi Mahasabha in Sukma in the party-ruled Chhattisgarh has been denied permission by the district administration, prompting senior CPI leader and ex-MLA Manish Kunjam to call out the grand old party for its “double standards”. However, despite the denial of permission from the authorities, the Adiwasi Mahasabha kicked off its march from Silger today. The yatra has been taken out to highlight various tribal issues and concerns and to remind the Bhupesh Baghel-led state government of their alleged unfulfilled promises for the progress and development of tribals in the state. A senior Congress leader says the party’s decision to ignore the yatra will cost the party heavily in the 2023 polls.

From the Urdu Press: The spectre of the Babri Masjid demolition haunted the Urdu dailies as they spotlighted the Varanasi district court’s decision to allow the hearing of the plea seeking the right to worship deities within the Gyanvapi mosque, ruling that it is not barred by the Places of Worship Act, 1991. The news about Vedanta-Foxconn’s decision to shift its project to Gujarat from Maharashtra; Prime Minister Narendra Modi remarks on the Ukraine war during his meeting with Russian President Vladimir Putin at the SCO Summit; and Congress leader Rahul Gandhi’s Bharat Jodo Yatra were also covered by the Urdu dailies.

In order to reduce the use of chemical fertilisers by incentivising states, the Union government plans to introduce a new scheme – PM PRANAM (PM Promotion of Alternate Nutrients for Agriculture Management Yojana). The proposed scheme intends to reduce the subsidy burden on chemical fertilisers, which is expected to increase to Rs 2.25 lakh crore in 2022-2023, which is 39 per cent higher than the previous year’s figure of Rs 1.62 lakh crore. What is the scheme, and why is it being introduced? We explain.