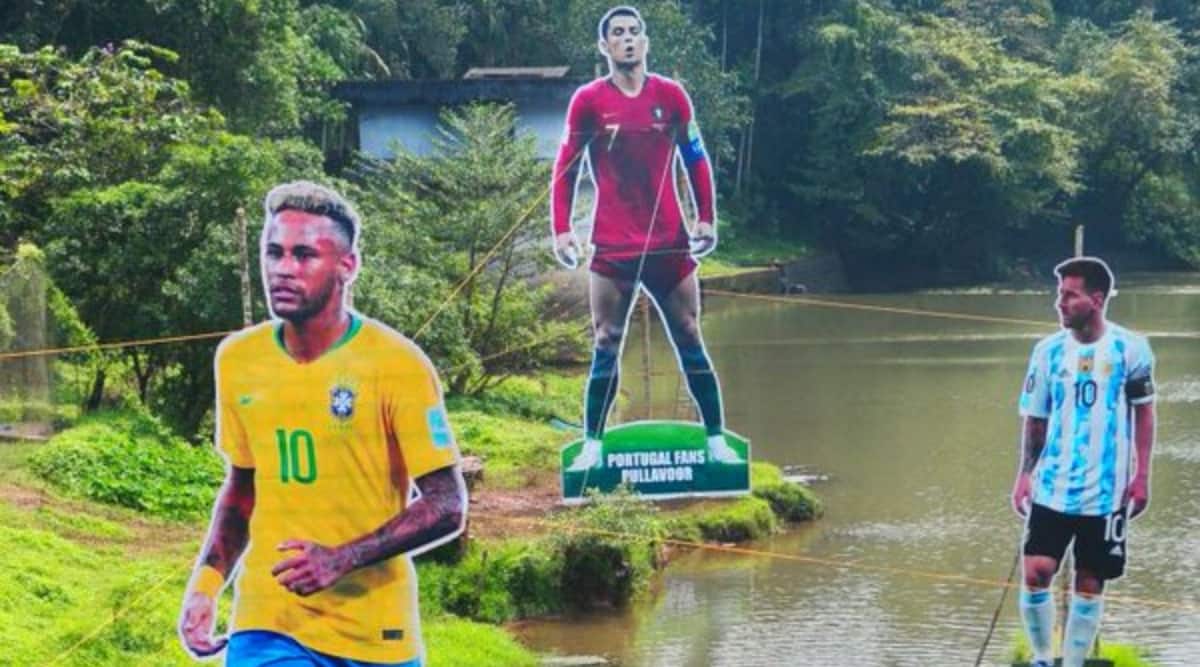 The ‘Messiah’ walked on water, a looming Neymar a few paces ahead of him. But towering over them all, watching from the banks of the Kurungattu Kadavu river, was the 45-foot-tall Ronaldo.

Last week, this image from Pullavoor village in Kerala’s Kozhikode district, of cut-outs of three of the sport’s all-time greats, captured the height of football frenzy in a state that has already begun dressing up for the biggest sporting event in four years — the FIFA World Cup, to be held in Qatar.

Giant cutouts of Neymar, Cristiano Ronaldo and Lionel Messi popped up on a local river ahead of the tournament.

FIFA, the international body governing football, had shared a photograph of the cutouts in the Pullavoor river and tweeted, “#FIFAWorldCup fever has hit Kerala.”

FIFA’s acknowledgment of Kerala’s obsession with the sport prompted CM Pinarayi Vijayan to respond with a tweet: “Kerala and Keralites have always loved football and it is on full display with #Qatar2022 around the corner. Thank you @FIFA for acknowledging our unmatched passion for the sport.”

Pullavoor football fans, however, say they aren’t surprised, even if a little amused, at the sudden attention that their village has got. “Football world cups have always been a carnival for us. Last time, we put up a giant Argentina flag across the river and that created quite a buzz too,” says Jabir, 28, who owns a jewellery store in the village.

This time, too, it was Jabir who, around six months ago, came up with the idea of placing a cutout of Messi mid-stream, on a small island of green.

In recent years, Pullavoor, a village of Gulf expatriates in Kunnamangalam block of Kozhikode, has largely been split down the middle over their football loyalties towards Argentinian Messi and Brazilian Neymar. Jabir says he has been a Messi fan for as long as he can remember.

“After we put up Messi’s cut-out, Neymar fans outdid us by putting up a taller, 40-ft one, of their hero. But it was all in the right spirit. We didn’t feel snubbed. There is a bridge near the river, it provides the best view. What a sight these cut-outs are! The whole world knows our village now,” he says, beaming.

Akbar, who put up the Neymar cut-out with his friends, says, “Messi fans were trying to needle us, so we got back with Neymar.”

The comeback by the Neymar fans involved an elaborate plan. “We have a WhatsApp group with more than 75 Brazil fans. I brought up the plan to install a cutout of Neymar in the river and managed to convince the group to contribute. Many non-resident Keralites pitched in too,” says Akbar, 29, who owns a mobile phone store in the village.

And in a magnanimous display of sportsmanship, the fans decided Ronaldo, that other GOAT, couldn’t be left behind. “There are only four-five Ronaldo fans here, but we thought we had to give them a representation as well. So of us — Messi, Neymar and Ronaldo fans — pooled in money for the cut-out,” says Akbar.

As it turned out, at 45 feet, the Ronaldo cut-out ended up being the tallest of the lot.

As with almost everything else in Kerala, the cut-outs generated a heated debate — and a complaint to the Koduvally Municipality — over whether they were impeding the flow of the river.

Abdu Vellara, chairperson of the Koduvally Municipality who is from Pullavoor, says, “We have always been a football-loving crowd. Our village has a history of boisterous celebrations. Earlier, private individuals would screen matches, but this year, our municipality has decided to place a huge screen in the village for everyone to watch. And no… the cutouts won’t come in the way of the river. The controversy is just baseless.”

MLA PTA Rahim, too, says the controversy is unwarranted, “I visited the spot today and saw many people posing with the cut-outs and taking photographs. The villagers are euphoric at all this attention.”

Like most other evenings, children and men gather at the New Friends ground. But these days, with the World Cut frenzy building up, the ‘players’ have traded their shirts for jerseys of their favourite teams — mostly the striped blue of Argentina and the yellow of Brazil. As players tackle the ball and occasionally send it racing across the ground, they let out loud roars. Metres away, at the Kurungattu Kadavu river, the cut-outs sway gently in the evening breeze — a silent acknowledgement from the GOATS of Pullavoor’s passion for the sport.

Not opposed to withdrawal of cases, but courts should examine, says SC Supreme Court takes up plea against GM mustard; its release on hold