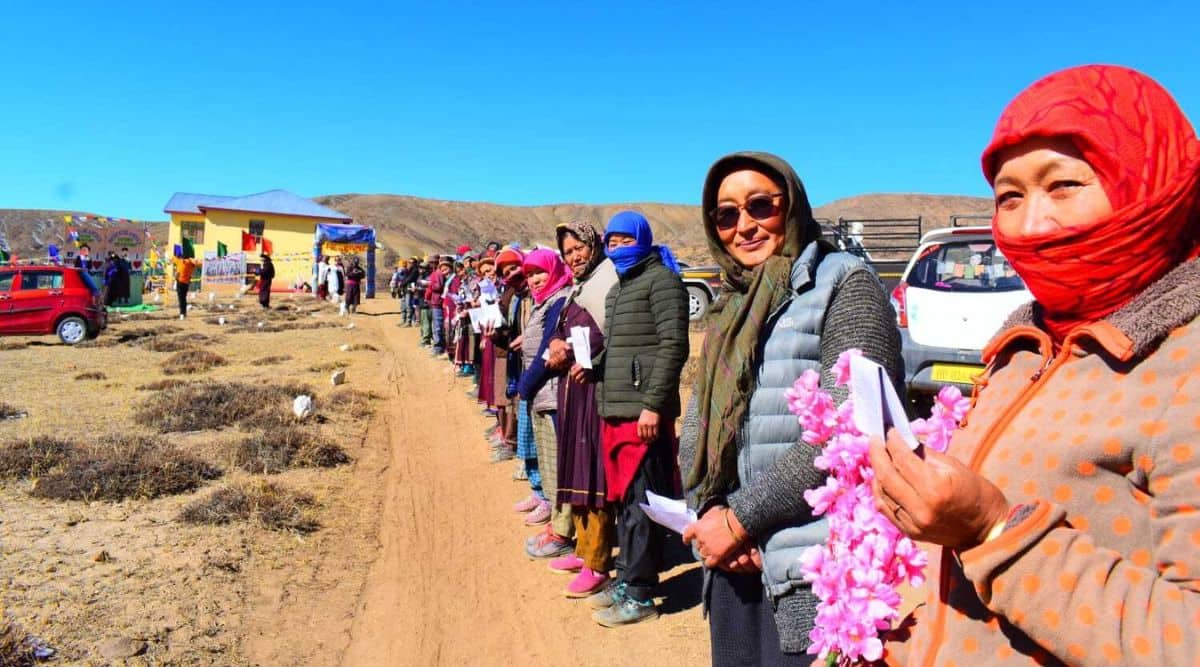 Song, dance, and sweets welcomed voters at the Tashigang model polling station, the world’s highest, in the Lahaul and Spiti district when the state of Himachal Pradesh went to polls on Saturday.

Situated at a height of 15,256 feet, Tashigang polling station witnessed a 100 percent turnout, as all 52 of its voters came to cast their vote despite bone-chilling cold. Of the total 52 voters, 30 are male and 22 female.

Tashigang (Lahaul&Spiti ), has world’s highest polling station at 15,256 ft & 52 registered voters, is set to retain its record of 100% voter turnout in the Nov 12 assembly election. It has been made Model Polling station to make voting easy for senior citizens & disabled voters. pic.twitter.com/SJcw86Z3lL

Where exactly is the Tashigang polling station located?

Tashigang’s polling station lies in the border districts of Lahaul and Spiti. The village records heavy rainfall and chilly winds through the winter. It falls under the Mandi parliamentary seat and caters to voters in the Tashigang and Gete villages. Earlier, Hikkim had the status of being the highest polling station.

This is Tashigang Village, the highest polling place in the world(4640m)

The people of village will cast their vote tomm for Vidhan Sabha elections. 100% voting in last elections.

At the polling station, voters were welcomed with local songs and dances, and food was also served. It was made a model polling station to allow easier access for senior citizens and the differently-abled.

The polling station was set up in the 2019 Lok Sabha election, during which it witnessed a 100 percent voter turnout. Voting was also held here during the Mandi Lok Sabha bypolls last year.

Incumbent Lahaul and Spiti MLA and BJP’s Ram Lal Markanda, Congress’ Ravi Thakur and AAP’s Sundershan Jaspa were the candidates contesting from the seat. For the past three elections, Markanda and Thakur have been alternatively winning this seat and this time Congress feels it is certain that the constituency will fall in its lap.

What are the poll issues in Tashigang?

In the Lahaul and Spiti constituency, among the major issues is the lack of water supply for drinking and agriculture.

Unemployment is also a major issue with Congress claiming that the region has been losing out to its share of tribal quota in government jobs while BJP counters with figures of jobs given to the youth. Another issue is the lack of medical staff at the community medical centers.

Himachal Pradesh, which has 68 Assembly seats, registered 75.06 percent voting. The Lahaul and Spiti constituency recorded a 73.75 percent voter turnout, 0.58 percent higher than the 2017 elections. The current term of the Assembly will end on January 8. The counting of votes will take place on December 8.

In apparent message to government, Varun Gandhi shares clip of Vajpayee’s speech in support of farmers