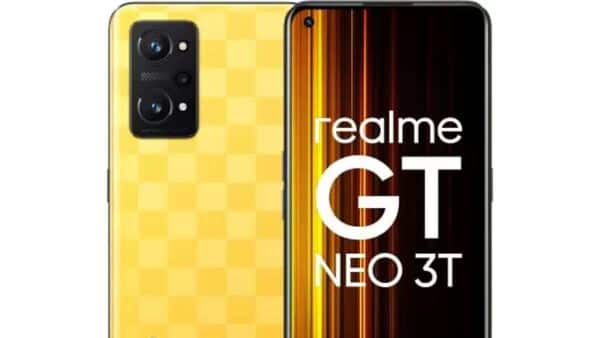 Realme GT Neo 3T is official in India. The smartphone was launched in the country at 12pm today. It is a mid-range smartphone that comes powered by Qualcomm Snapdragon 870 processor. The device is backed by a 5,000mAh battery and offers 80watt fast charging support. The technology is claimed to power up the device from 0 to 50% in under 12 minutes.

Realme new smartphone will go on sale in the country on September 23 via Realme.com, Flipkart and offline retail stores. Realme GT Neo 3T will get a discount of ₹7,000 during the Flipkart Big Billion Days sale. The annual festival sale will start on September 23.

Drifting White, Dash Yellow and Shade Black are the three colour variants of Realme GT Neo 3T. The smartphone is equipped with a 6.62-inch E4 AMOLED display with a refresh rate of 120Hz. The phone offers a peak brightness of 1300 nits and offers support for HDR10+ content.

Powering the phone is the Qualcomm Snapdragon 870 chipset paired with up to 8GB of RAM and up to 256GB of internal storage. The handset runs on the company’s own Realme UI based on Android 12 operating system. Realme GT Neo 3T comes with a Vapor Chamber-based cooling to regulate the device’s temperature. On the camera front, the handset boasts of a 64MP primary camera paired with an 8MP camera and 2MP macro lens. 4 in every 5 enterprises set to increase cloud budgets in 12 months: Survey