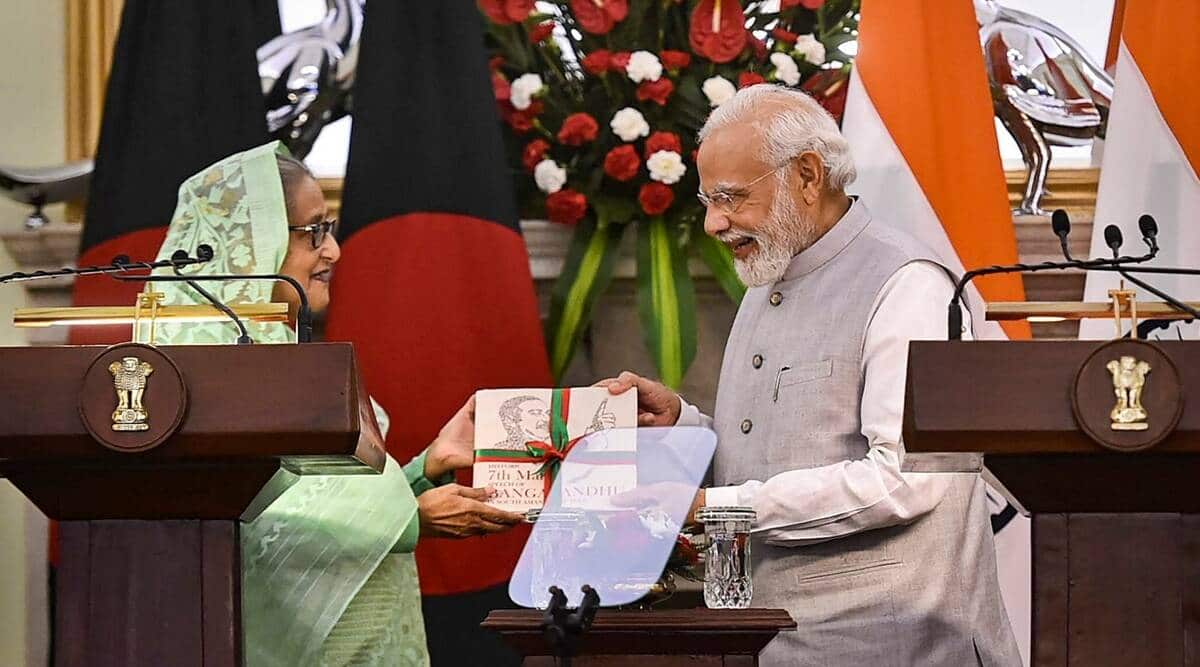 BRING THE number of deaths along the border to zero; finalise defence projects under Line of Credit; start talks for a comprehensive trade pact in 2022; conclude the Teesta water-sharing treaty soon; ensure uninterrupted supply of essential goods to Dhaka; build railway links in Bangladesh; allow coastal radars along the neighbouring country’s coast.

These are the key takeaways from Bangladesh Prime Minister Sheikh Hasina’s meetings with Prime Minister Narendra Modi and other top leaders during her visit to India over the last two days.

On Wednesday, Hasina said the bilateral relationship is a role model for neighbourhood diplomacy worldwide.

“Having forged a strong partnership over the last 50 years, both countries are working on an increasingly wide range of sectoral collaboration,” she said at a function to award the Mujib Scholarship to direct descendants of Indian soldiers and officers killed or critically wounded during the Liberation War of Bangladesh in 1971. “I want our friendship to last forever,” she said.

On Wednesday, a day after the bilateral meeting between Modi and Hasina in New Delhi, the two countries also released a joint statement.

The highlights of the statement include:

Border: Recognising that peaceful border management is a “shared priority”, the statement said that the two leaders directed officials to “expedite work to complete all pending developmental works within 150 yards of the Zero Line, including fencing starting with the Tripura sector with the objective of maintaining a tranquil and crime-free border”.

It said, “Noting with satisfaction that the number of deaths due to incidents along the border has significantly reduced, both sides agreed to work towards bringing the number down to zero.”

It said that both sides noted with appreciation the stepped-up efforts by their border forces against smuggling of arms, narcotics and fake currency, and to prevent trafficking, particularly of women and children. “Both leaders reiterated their strong commitment to eliminate terrorism in all its forms and manifestations and decided to further strengthen their cooperation to counter and prevent the spread of terrorism, violent extremism and radicalisation in the region and beyond,” it said.

Water: Hasina reiterated Bangladesh’s “long pending request for concluding the interim agreement on the sharing of waters of the Teesta River, the draft of which was finalised in 2011”.

Trade: The statement said the two leaders “welcomed the recent finalisation of a Joint Feasibility Study which recommended that the Comprehensive Economic Partnership Agreement (CEPA) will be beneficial for both countries”. “They directed trade officials on both sides to start negotiations within the calendar year 2022 and to complete these at the earliest, in time for Bangladesh’s final graduation from LDC (Least Developed Countries) status,” it said.

Defence: Expressing satisfaction at the intensification of defence ties, the leaders agreed for “early finalisation of projects under the Line of Credit for defence, which would be beneficial for both the countries”. The statement said India welcomed the “finalisation of initial procurement plans for vehicles for the Bangladesh Armed Forces in this regard and looked forward to enhancing bilateral defence ties”.

India reiterated its request for implementing the 2019 MoU for providing a coastal radar system for greater maritime security at an early date. It asked Bangladesh to implement a three-year-old agreement allowing it to set up a network of surveillance radars along the neighbouring country’s coastline.

Connectivity: The statement said the two leaders underscored the importance of implementing bilateral and sub-regional rail, road and other connectivity initiatives. “Both sides welcomed the ongoing bilateral initiatives, such as conversion to dual-gauge of Tongi-Akhaura line, supply of railway rolling stock, capacity building for the personnel of Bangladesh Railway, sharing of IT solutions for improved services of Bangladesh Railway,” it said.

“Both sides also welcomed the new initiatives, namely, Kaunia-Lalmonirhat-Mogalghat-New Gitaldaha link, establishing a link between Hili and Birampur, upgradation of track and signalling systems and railway stations along the Benapole-Jashore line, link restoration between Burimari and Changrabandha, construction of a container depot at Sirajganj, etc., and both sides agreed to explore funding of these projects through a range of financial instruments under the bilateral development cooperation. The Bangladesh side welcomed the gesture of India for providing 20 broad-gauge diesel locomotives on grant,” it said.

Rohingya: According to the statement, “India expressed appreciation at the generosity of Bangladesh in sheltering and providing humanitarian assistance to over a million persons forcibly displaced from the Rakhine State in Myanmar and underlined its continuing commitment to support both Bangladesh and Myanmar, as the only country that is neighbour of both, in the effort to ensure safe, sustainable, and expeditious return of these forcibly displaced people to their homeland.”

Essential goods: It said Bangladesh requested India for continued supply of essential food commodities such as rice, wheat, sugar, onion, ginger and garlic. “The Indian side conveyed that Bangladesh’s requests will be favourably considered based on prevalent supply conditions in India, and all efforts will be made in this regard,” it said.

As schools reopen, Andhra decides to give pneumonia vaccines to kids

As Hanuman Chalisa row flares up, a question hovers: ‘Did Sena walk into a BJP trap?’