Zomato Ltd has chosen profitability over growth in the September quarter (Q2FY23) and this has cheered the company’s shareholders.

The shares of the online food delivery company have gained nearly 9% since it announced its Q2 earnings after market hours on Thursday. Contribution profit in the food delivery business as a percentage of gross order value (GOV) rose to 4.5% from 2.8% in Q1. Moreover, 248 out of the over 1,000 cities that Zomato operates in were contribution-positive in the last quarter, higher from 215 cities in Q1

However, this does not soothe concerns on the muted growth in GOV, though the company has strategically chosen to trade low-quality growth for better unit economics. Be that as it may, the lower app opens in Q2 is a point of worry, indicating low intent to spend on this category. Plus, the seasonality that is a result of rains also weighed on GOV in Q2 when the sequential growth stood at a mere 3%. This is much lower than almost 10% and 6% GOV growth seen in the June quarter and the March quarter, respectively.

“While we are impressed with the better-than-expected profitability, we will closely monitor GOV growth trends as growth slowdown will have valuation implications,” Nuvama Research analysts said in a report on 12 November.

However, Q3 should be better, because of the festive season and sporting events such as the T20 World Cup and the Football World Cup, which should boost demand for food delivery. Further, the company sees the possibility of improvement in take rate, which is revenue as a percentage of GOV. An increase in take rate along with cost optimization led to the rise in Q2 contribution margin.

However, the pace of increase in the contribution margin is likely to slow down hereon. As Zomato said, it has “pocketed a large portion of the low hanging gains for now.”

The other key factor to watch closely would be the ordering frequency in food delivery. Q2’s subdued GOV growth, despite a 4.8% sequential rise in average monthly transacting customers, indicates a slight fall in frequency.

Over the medium term, Zomato targets a contribution margin of 8% in the food delivery business to achieve an adjusted earnings before interest, tax, depreciation and amortization (Ebitda) margin of 4-5% (of GOV). It would be tough to increase adjusted Ebitda margin beyond a point without hurting growth. Excluding quick commerce arm Blinkit, the company intends to break even at the adjusted Ebitda level in two to four quarters. In Q2, this measure was in the red at negative ₹60 crore.

Nevertheless, losses from Blinkit, the acquisition of which was closed on 10 August, meant Zomato’s consolidated adjusted Ebitda loss swelled sequentially to ₹192 crore.

Quick commerce is also an opportunity for Hyperpure, Zomato’s supplies platform for restaurants. This segment has started supplying to sellers on Blinkit’s marketplace, the company said. Synergies from the Blinkit deal are yet to play out, but losses are narrowing and that is encouraging.

“We incorporate Blinkit in our estimates. We estimate quick commerce GOV to grow at a compound annual growth rate of 55% over FY23-26E as the business is still in early stage. We expect contribution break-even by FY26 and Ebitda break-even post FY26E,” said a Jefferies India report of 13 November.

Better-than expected profitability would be an important trigger for the Zomato stock, which is still about 8% below its issue price of ₹76. The challenge for Zomato is to balance profits and GOV growth. 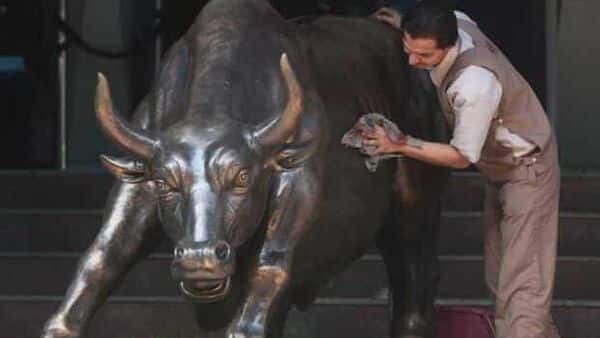