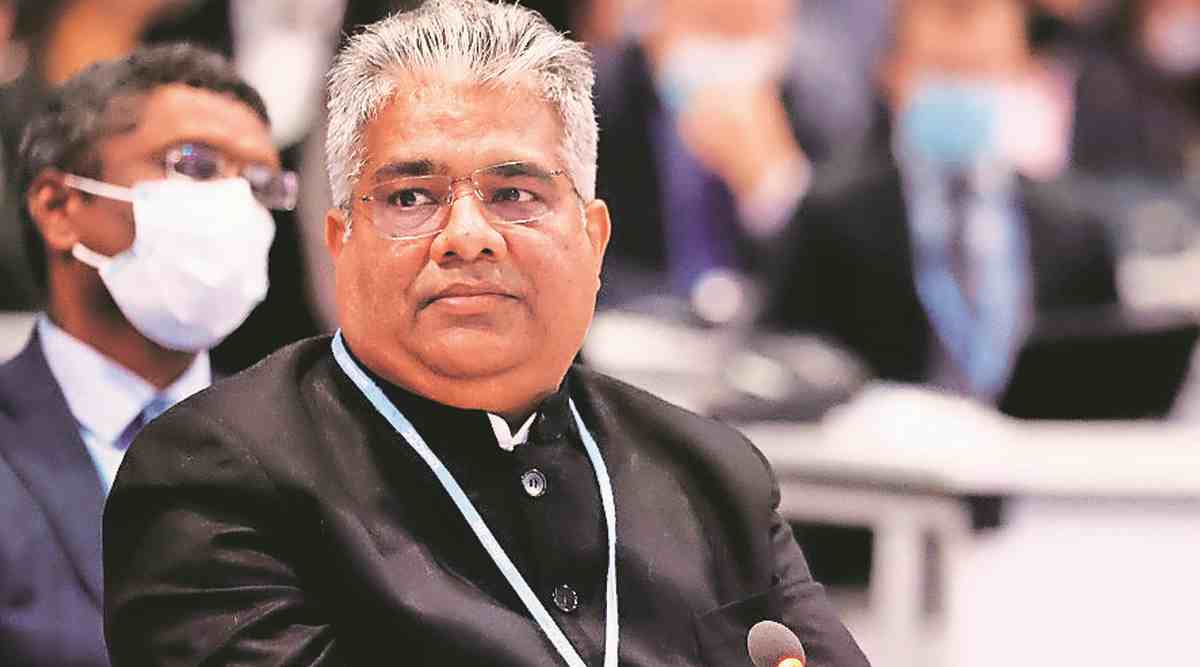 No sector or fuel source should be singled out for action in the fight against climate change, Environment Minister Bhupender Yadav has said at the UN climate summit in Egypt.

India had proposed on Saturday that the talks wrap up with a decision to “phase down” all fossil fuel, a call that received support from the European Union on Tuesday.

“In climate action, no sector, no fuel source and no gas should be singled out for action,” Yadav said at BASIC (Brazil, South Africa, India and China) ministerial meeting on Tuesday night.

“In the spirit of the Paris Agreement, countries will do what is suitable as per their national circumstances,” he said.

The minister added that developing countries should be provided their fair share of the full carbon budget and it can be done by “monetising the carbon debt of the developed countries”.

Yadav’s remark came hours after the US, Japan and other countries pledged to mobilise USD 20 billion to help Indonesia, the world’s fifth-largest greenhouse gas emitter, to move away from coal and accelerate efforts in the renewable energy sector.

The pact, formally known as a Just Energy Transition Partnership, was unveiled at the Group of 20 leaders summit in Bali, Indonesia.

“For India, just transition means transition to a low-carbon development strategy over a time scale that ensures food and energy security, growth and employment, leaving no one behind in the process,” Yadav said.

“Any partnership with developed countries, in our view, must be based on these considerations,” the minister said.
EU Vice President Frans Timmermans said the bloc would support India’s proposal of phase down of all fossil fuels “if it comes on top of what we already agreed in Glasgow”.

He added that “it should not divert attention to our efforts to phase down coal as we had agreed last year”.

Citing the Sixth Assessment Report of the Intergovernmental Panel on Climate Change, Indian negotiators had told the Egyptian COP27 presidency that meeting the long-term goal of the Paris Agreement “requires phase down of all fossil fuels”.

“Selective singling out of sources of emissions, for either labelling them more harmful or labelling them ‘green and sustainable’ even when they are sources of greenhouse gases, has no basis in the best available science,” the Indian side had said.

It should be acknowledged that “all fossil fuels contribute to greenhouse gas emissions”, India had said as it urged “acceleration of the global clean energy transition, as per national circumstances”.

Despite a massive expansion of the renewable energy sector, developed countries have consistently pushed India to reduce its reliance on coal-fired electricity. Coal accounts for around 50 per cent of the country’s installed power generation capacity.

India, on the other hand, has made it clear that it would continue to rely on coal as a major source of power generation for some more years.

“We cannot have a situation where the energy security of developing countries is ignored in the name of urgent mitigation, while developed nations put their energy security above their duty to increase their ambition to mitigation through practical action,” Yadav had said while releasing India’s long-term low-emission development strategy on Monday.

At the BRICS meet, Yadav also said that India is making determined efforts, “well beyond our share of responsibility”.

“In undertaking climate action, India would like to reiterate its position on two key issues. The first is equity and climate justice. India holds that all countries are entitled to their fair share of the global carbon budget and must stay within this in their cumulative emission.

He added that this could be done through extensive negative emissions and monetising the carbon debt of the developed countries.

Carbon budget is the amount of carbon dioxide that the world can emit while still having a chance to contain global warming within 1.5 degrees Celsius as compared with the preindustrial levels, according to the Paris Agreement.

The Global Carbon Project, a group of scientists who track emissions and publish in peer-reviewed scientific journals, estimates that 380 billion tonnes of CO2 (GtCO2) can still be emitted for a 50 per cent chance of staying below 1.5 degree Celsius of warming.

If current emissions levels persist, the budget will be exhausted in just nine years.

According to Carbon Brief, countries had pumped more than 2,500bn tonnes of CO2 (GtCO2) into the atmosphere since 1850. The US has released more than 509GtCO2 since 1850 and is responsible for the largest share of historical emissions (20 per cent of the global total), followed by China (11 per cent), Russia (7 per cent), Brazil (5 per cent) and Indonesia (4 per cent). To curb use of chemical fertilisers, Govt to give nod to PM PRANAM