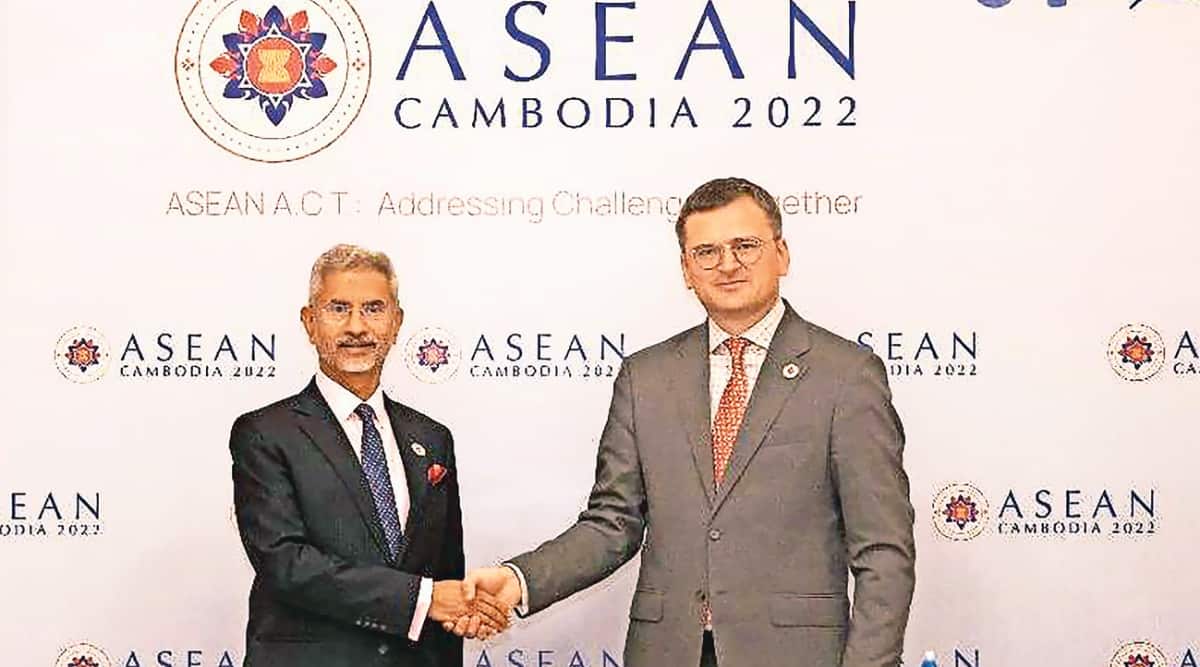 Jaishankar and Kuleba met on the sidelines of the ASEAN-India summit in the Cambodian capital Phnom Penh. He is accompanying Vice President Jagdeep Dhankhar who is leading the Indian delegation to the ASEAN-India Commemorative Summit and the 17th East Asia Summit .

“Pleasure to meet FM @DmytroKuleba of Ukraine. Our discussions covered recent developments in the conflict, the grain initiative and nuclear concerns,” Jaishankar said in a Twitter post. India has, in the past, expressed concern over the nuclear rhetoric by Russia.

Kuleba said, “My Indian counterpart @DrSJaishankar and I met to discuss bilateral cooperation and ways to end Russia’s war on Ukraine. I emphasized that Russia must immediately cease deadly attacks, withdraw all troops from Ukraine, and commit to peace. We also focused on global food security.”

Saurabh Kumar, Secretary (East) in the Ministry of External Affairs, told reporters in Phnom Penh that they discussed the “state of play” in the situation in Ukraine.

Earlier this week, Jaishankar had gone to Moscow on a two-day visit, his first visit there since Russia launched its invasion of Ukraine in February this year.

On buying cheap Russian oil, he had made it clear that India will continue to buy them to cater to the Indian consumers.

In August this year, Kuleba had criticised India for its continued purchase of Russian crude oil amid Moscow’s ongoing war with Ukraine.

“Every barrel of Russian crude oil delivered to India has a good portion of Ukrainian blood in it,” Kuleba had said at a press conference.

In Moscow, Jaishankar had said that the Ukraine conflict was a dominant feature in his discussions with the Russian Foreign Minister.

He had said the global economy is so interdependent that it will be impacted by any significant conflict, and the Global South is feeling “this pain very acutely”, especially after two years of the pandemic.

Framing it in this context, Jaishankar said India “strongly advocates a return to dialogue and diplomacy” and is on the side of “peace, respect for international law and support for the UN Charter”.

Prime Minister Narendra Modi has had at least five phone conversations with Russian President Vladimir Putin and at least three with Ukraine’s President Volodymyr Zelenskyy – it is also an indicator that Delhi has communication channels open with both sides. In between, Modi has had meetings and phone calls with US President Joe Biden, German Chancellor Olaf Scholz and French President Emmanuel Macron.

UN Secretary General Antonio Guterres has reached out to India to help defuse the crisis on at least one occasion. In September this year, Jaishankar disclosed that India had weighed with Russia on grain shipment from ports in the Black Sea.