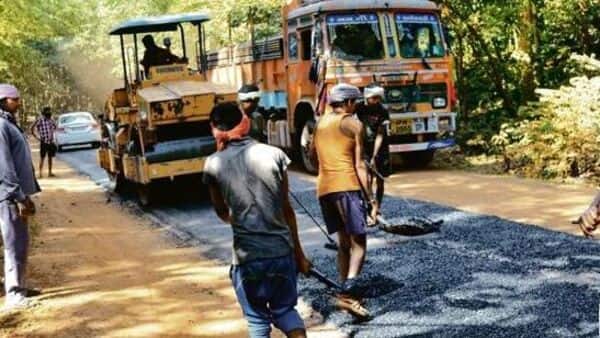 That’s right. If and when achieved, this would be an unprecedented rate of construction. It would be among the best road construction rates in the world.

‘My ministry and my team is working hard, and even during COVID-19 pandemic time, our (highway) construction rate was 38 km per day and my ambition is to take it up to 60 km per day, it is a target’.

India achieved a rate of 28.64 km per day in 2021-22. This was quite low by India’s road construction standards. The pace had reduced due to Covid-related disruptions and a longer-than-usual monsoon in some parts of the country.

In 2022-23, construction activity picked up significantly. However, it has been hampered due to high input costs. As per a report by Crisil, India is likely to achieve a rate of around 32-34 km per day.

Now this rate is also quite good. In fact, before Covid, India had already achieved a record 37 km per day for in 2020-21. But the overall target is 60 km per day.

So how will this ambitious target be achieved?

Now, these agencies won’t build all the roads themselves. They offer contracts to private players to ensure high-quality, timely deliveries of various road projects all across the country.

Many of these private firms and their suppliers are listed on the Indian stock market. This provides a way for investors to profit from India’s road-building boom.

Consider the fact that the Indian government wants to massively scale up road construction in the country. Thus we can expect to see several projects being awarded over the next few months.

We can expect the pace of road construction to pick up massively from the next month onwards as the monsoon ends. Even if the ambitious 60 km per day target is not achieved in 2022-23, there’s a decent chance it being achieved in 2023-24.

Investors with a horizon of at least two years can consider stocks of companies that will benefit from this boom.

Companies to watch out for

Here’s a list of listed companies in road construction which are likely to be the big beneficiaries of India’s ambitious road building spree.

IRB Infrastructure Developers (IRB) has extensive experience in road and highway construction. It is also present in multiple other sectors, including real estate, airport development, and maintenance of roads.

Going forward, with government’s continued focus on creating infrastructure and IRB Infra’s ability to build its order book will drive its revenue growth.

Some of the key business sectors for L&T are infrastructure, hydrocarbon, power, defence, and information technology.

Gayatri Projects is one of India’s largest infrastructure companies. It’s the flagship company of the reputed and diversified Gayatri Group.

The company has interests in infrastructure, power, hospitality, real estate, and industry. It’s headquartered in Hyderabad.

Dilip Buildcon, founded in 1987, has emerged as one of India’s top infrastructure companies. It’s actively involved in developing several road projects on an EPC basis.

It’s also among India’s fastest-growing road contraction companies. Over the years, the company has developed a reputation for delivering projects on time with high-quality standards.

Ashoka Buildcon was incorporated in the year 1993. The company is engaged in the business of construction of infrastructure facilities on an engineering procurement and construction basis (EPC) and built operate and transfer (BOT) basis and sale of ready mix concrete.

It has promoted special purpose vehicles (SPVs) for some of its projects wherein ‘Toll Collection Rights’ are received in exchange for the construction cost.

HCC ltd is one of India’s pioneering infrastructure companies. Founded in 1926, this company has executed several landmark projects.

As a large infra company with proven expertise, the company should benefit significantly from the Indian government’s huge road development push. What is an open offer and how is it priced? Investors are waiting for GCPL turnaround