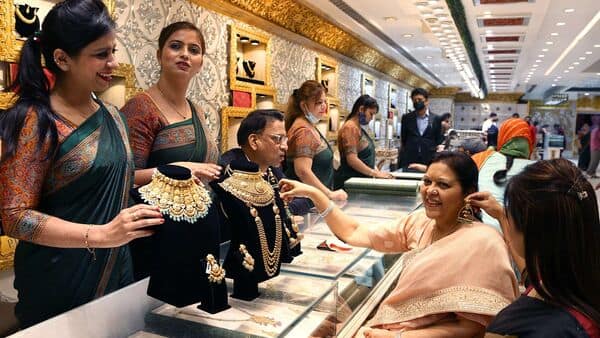 Gold rate today: After an unexpected and disappointing US CPI data in the week gone by, gold price witnessed huge sell-off in spot and domestic markets. The US inflation in August rose higher at 8.3 per cent year-on-year (YoY) against expectation of 8.1 per cent that triggered speculation about a 100 bps interest rate hike by the US Fed in its upcoming meeting next month. On weekly basis, gold price on MCX (Multi Commodity Exchange) nosedived ₹1,187 per 10 gm (2.35 per cent) from ₹50,521 to ₹49,334 levels, hitting 6-month low on the domestic bourse. In spot market, yellow metal price hit 2-year low of $1,654 on Friday but the precious metal witnessed some relief rally and finally ended at $1,674 per ounce on the weekend session, recording weekly dip of around 2.45 per cent.

According to commodity market experts, gold price is expected to remain range-bound with negative bias till US Fed meeting scheduled next week. They said that spot gold price is currently trading in the range of $1,640 to $1,685 per ounce levels. On breaching the lower levels in spot market, the yellow metal has next support placed at $1,610 per ounce levels whereas on the upper side, the precious bullion has next hurdle placed at $1,710 levels. Hence, short range of spot gold price till US Fed meeting would be $1,640 to $1,685 whereas broader range of gold rates would be $1,610 to $1,710 per ounce levels. On MCX, immediate support for gold rates are placed at ₹48,800 whereas strong support is at ₹48,300 per 10 gm while immediate hurdle for MCX gold price is placed at ₹49,700 whereas strong hurdle is now placed at ₹50,200 per 10 gm levels.

Speaking on the reasons for gold price tumble, Anuj Gupta, Vice President — Research at IIFL Securities said, “Gold rates are falling globally after the disappointing US CPI data for August. Market was expecting decline in US inflation by 0.1 per cent whereas the CPI data for August witnessed jump by 0.1 per cent. This has triggered speculation about 100 bps US Fed interest rate hike in the US Fed meeting scheduled next week. So, investors are switching towards the US dollar, squaring off their position in the yellow metal. This has led to rise in the dollar index again.” He said that these two triggers are going to dominate gold rates across globe till the US Fed meeting is not over.

Advising ‘sell on rise’ strategy to short term traders, Amit Sajeja, Vice President — Research at Motilal Oswal said, “Overall trend for gold is sideways to negative. So, one should maintain sell on rise strategy till the final minutes of US Fed meeting becomes public. In spot market, one should sell around $1,685 levels maintaining stop loss around $1,710 and book profit around $1,650 to $1,645 per ounce levels.”

For MCX traders, Amit Sajeja of Motilal Oswal advised traders to sell gold at around ₹49,800 levels for the target of ₹49,200 and ₹48,900 per 10 gm levels. However, Motilal Oswal expert advised strict stop loss above ₹50,200 levels while taking these short positions in the yellow metal.

The US inflation in August rose higher at 8.3 per cent YoY against expectation of 8.1 per cent. The CPI index increased 0.1 per cent month on month while the economists were expecting it to decline by 0.1 per cent over the month due to sharp correction in energy prices. However, decline in energy prices was offset by higher cost of food (+0.8% m/m) and shelter costs (+0.7% m/m). High costs of food, housing, transportation and other services reiterate the strong consumer demand and elevated service sector price pressures. With inflation being ‘stickier’ than expected, it is highly likely that the Fed will go for another jumbo rate hike of 75 bps to 100 bps in its next FOMC meeting on 21st September. Bonus shares six times in 10 years. Do you own this auto sector stock?