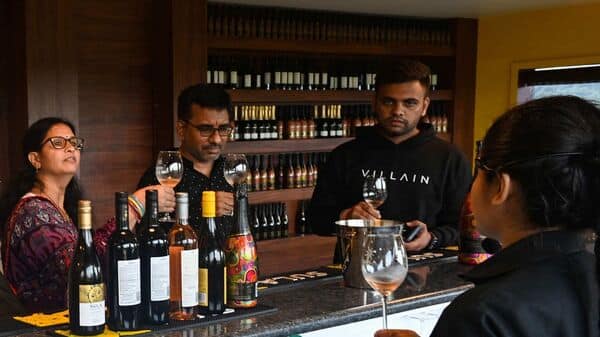 Wine makes up less than one percent of India’s massive alcohol market, with spirits the overwhelming drink of choice in the nation of 1.4 billion people.

On average, Indians each drink only a few spoonfuls of wine a year, but producers hope the country will replicate the wine boom in China when its economy took off in the 1980s.

Still, experts warn their rosé ambitions are tempered by uncertainties including the impact of climate change on viniculture, and an Australian trade deal lowering import tariffs.

When the Stanford University graduate returned from California, he initially tried growing roses and mangoes on family-owned land near Nashik, an ancient holy city about 160 kilometres (100 miles) from financial hub Mumbai.

“Where Sula is today, it was just grassland. There were leopards and snakes. There was no electricity, there was no telephone line,” as if it was a century earlier, Samant told AFP.

“I saw some beauty here, there was something about the place that really struck me.”

India is one of the world’s biggest grape producers and Nashik is one of its key regions, but back then the vines were all table grapes for eating and raisins, rather than wine grapes.

Samant was inspired by his visits to California’s Napa Valley wine country.

“Why not try to make a decent, drinkable wine right here in India, proudly made in India?” he thought. “And that’s what I decided to do.”

Named after Samant’s mother Sulabha, Sula planted its first vines in 1996, later building a sprawling resort and helping to cultivate a new reputation for Nashik as India’s wine capital.

Applications for shares in its IPO open next week, it said Wednesday, with its owners selling around a third of the company for up to 9.6 billion rupees ($116 million), valuing it at about $350 million.

Higher-priced Indian wines are becoming comparable to their international peers in terms of quality, according to Ajit Balgi, founder of Mumbai-based wine and spirit consultancy The Happy High, although they remained “Indian style” in flavour.

“They won’t be tasting the same as an Australian or a French wine,” he said. “India is too close to the equator, so our grapes that we choose are the riper ones.”

New drinkers tended to have a sweet tooth and were attracted to “jammier” wines, he added. “Most start their association with wine with sangria.”

Wine consumption in India has risen from negligible levels in 1995, while women drinking in public has become more acceptable as more joined the workforce, but volumes still stood at just 20 million litres last year, according to the International Organisation of Vine and Wine.

Mumbai businessman Parimal Nayak is a fan, and visited the Sula vineyard with his family to celebrate his 44th birthday.

“Sula wines has improved a lot… and the atmosphere here is good,” he told AFP. “I’m proud of it.”

But the biggest obstacle to expansion was cost, said Balgi.

Wine is often taxed at similar levels to spirits in many Indian states, despite having much lower alcohol content.

“The price of a basic Indian wine is comparable to that of a full bottle of rum or basic whisky,” he said. “There is not much wine consumption in India because the masses cannot afford it.”

Sula reported revenues of 4.5 billion rupees and a net profit of 521 million rupees in the last financial year, and saw average annual revenue growth of more than 13 percent in the decade to March 2022.

Samant, 55, plans to sell around five percent of his 27 percent stake in the firm.

But several recent Indian tech IPOs have flopped. Payments firm Paytm has lost three-quarters of its value since listing a year ago, and analysts say many firms are overvalued.

Sula could face increasing competition from foreign wine, which currently makes up 17 percent of the Indian market.

A recent trade pact with its biggest supplier Australia will cut import duties for some wines from a punishing 150 percent.

If growers do not adapt to the changing climate, Vaze said, “there could be a day where we are… biting on the last piece of chocolate or having the last glass of wine”. Cryptocurrency prices today plunge as Bitcoin back below $30,000 Dividend paying stocks: These 2 stocks to trade ex-dividend next week