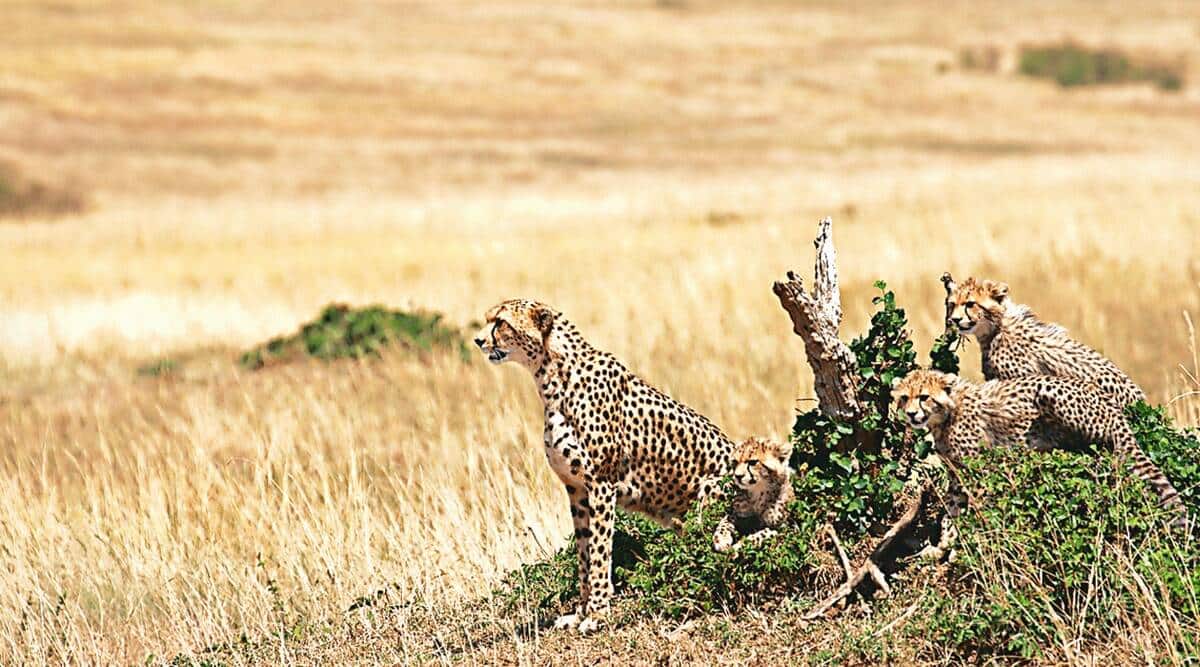 On Friday, five female and three male African cheetahs will set off on an over 10-hour, 8,000-km transcontinental journey to their new home in India. And among those making the journey on the Boeing 747 jet is one of the world’s leading experts on cheetahs, Dr Laurie Marker, who says managing a human-animal conflict will be the biggest challenge in India.

Aged between two and six years, the cheetahs are currently being kept in a “boma”, a small fenced camp, for quarantine and treatment at the Cheetah Conservation Fund (CCF) centre in Namibia’s Otjiwarongo. Each animal has been vaccinated, fitted with a satellite collar, and given an extensive health check-up.

The modified Boeing cargo plane will leave Hosea Kutako International Airport in Namibia’s capital city of Windhoek and land in Jaipur airport by daybreak on September 17.

The animals will then head to their new home in Kuno National Park in Madhya Pradesh.

It is in Kuno where the real work will begin, Dr Marker, who is also CCF Founder and Executive Director, told The Indian Express.

The American expert has been an advisor to the Indian government on the cheetah relocation project over the past 12 years, and CCF has been in charge of the project on behalf of the Namibian government.

Dr Marker says she first carried out a cheetah relocation project from Namibia to South Africa in 2005 — the latter country now has nearly 1,000 individuals.

“As much as 77 per cent of the cheetahs in Africa actually live in regions outside Protected Areas — and the reason they have been able to co-exist with minimal human-animal conflict is not just because the cheetah is not an aggressive animal, unlike lions or tigers, but also because of the awareness programmes that the governments have created in educating farmers on how to handle cheetahs. Since cheetahs do attack livestock, the biggest threat to the cheetah I would say, and to conservation projects like reintroduction in India, is from farmers trying to defend their livestock. But there are methods to deal with this, including keeping herders, guardian dogs, and keeping livestock healthy and strong so they don’t get picked up by cheetahs,’’ said Dr Marker.

Dr Marker adds that keeping a healthy and prolific prey base will also ensure that the cheetah does not attack livestock.

“While we have carried out numerous projects of rewilding cheetahs across Africa since the 1990s, this is the first time such a trans-continental project like this is taking off. And it is of great importance to the global conservation of the cheetah, which is critically endangered in many parts. The cheetah has gone extinct in a number of countries due to human activity, so it is our responsibility to ensure that it is brought back and preserved. Of course the ideal situation would be to conserve animals because re-introduction is a difficult and long process. But once an animal becomes extinct, this is the only way,” said Dr Marker.

The arriving cheetahs, which include two male siblings, have been selected based on an assessment of their health, disposition, hunting skills, and ability to contribute genetics that will result in a strong founder population.

Cheetahs are among the oldest of the big cat species, with its ancestors going back about 8.5 million years. CCF believes that the number of cheetahs is just under 7,500 individuals globally. It is listed as “vulnerable” by the World Conservation Union (IUCN) Red List of Threatened Species. Two subspecies, the Asiatic cheetah and the Northwest African cheetah, are listed as “critically endangered”.

“The cheetah has lost 90% of its global habitat in the past 100 years and now lives in 9 per cent of its historic range. In the 31 populations of the cheetah, many have only 100-200 animals with their habitat continuing to be fragmented — these include areas in South Africa, Botswana, Namibia, Kenya and Tanazania. The onoing challenge is to maintain the population for future generations — and that’s why the Indian Government’s intiative is welcome and visionary,” Dr Marker said.

Dr Marker said cheetahs are adaptable and would be able to deal with Indian climate conditions. “In the parts of Africa where cheetahs are found, the temperatures can vary between very, very hot in the day to cold at night, and cheetahs can adapt to the seasonal shifts. They also contend with extreme rain and wet seasons in Africa, much like in India,” she says, adding that Kuno, which she has visited a number of times, provides an appropriate landscape for the animal.

According to a CCF analysis of documented cheetah translocations, at least 727 cheetahs were translocated to 64 sites in southern Africa between 1965 and 2010. Six of the 64 release sites were considered successful based on natural recruitment (births) exceeding adult mortality three years after introductions began.

Says Dr Marker: “We can of course not control adult mortality among the Cheetahs. Our attempt will be to ensure zero mortality, but there are no guarantees. For the India project to be successful, we will have to wait and watch for 5-10 years to see the impact of the translocation.”

The aircraft bringing back the animals has been sourced by Action Aviation which typically carries out animal translocations. Carrying an image of a tiger on its nose, it was sourced from a UAE-based aircraft company called Aquiline International Corp.

Sidelined by Cong, Bishnoi makes his next move clear, calls on Shah, Nadda