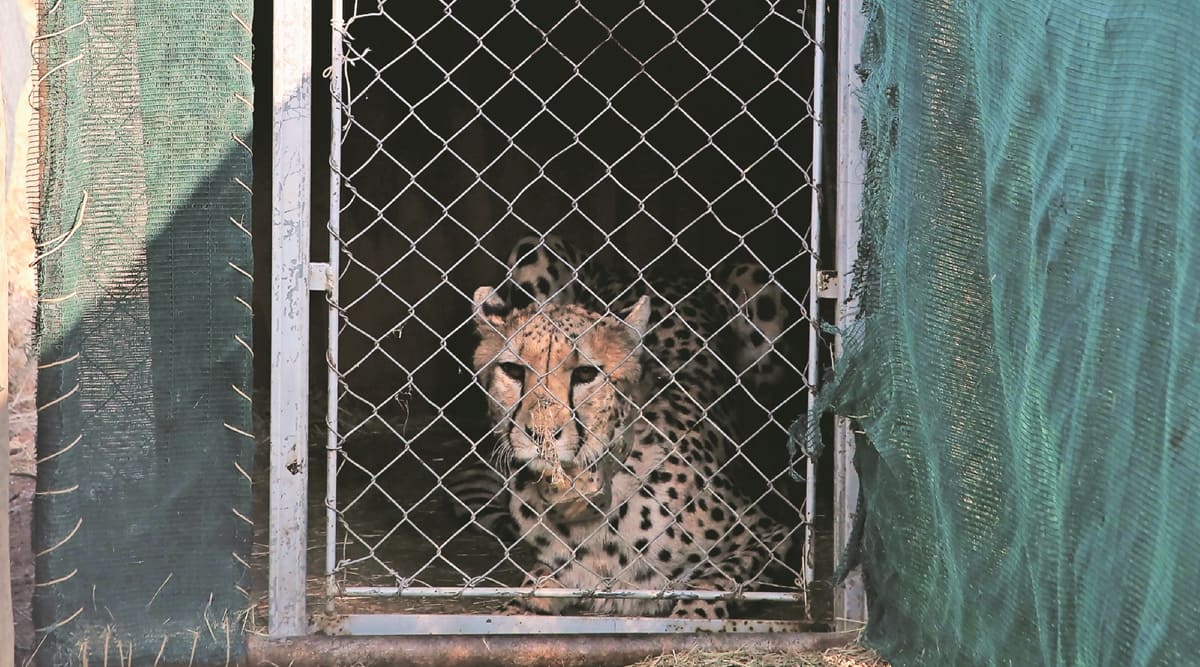 Kuno National Park in Madhya Pradesh is all set to welcome the eight Namibian cheetahs on Saturday as officials battled heavy rain, inclement weather and some blocked roads to complete the preparations for the Prime Minister’s programme to release the big cats.

The special cargo plane carrying the felines, which left Namibia Friday, will land at Gwalior in Madhya Pradesh between 6 am and 6:30 am, instead of Jaipur in Rajasthan, as planned earlier, officials said.

The animals will then be flown to Kuno in Sheopur district (165 km away) on an Air Force helicopter, which will take about 20-25 minutes.

Gwalior SP Amit Sanghi told The Indian Express: “We are expecting the aircraft carrying the cheetahs to land early morning at the airbase in Gwalior. All necessary arrangements to ensure a swift and smooth transition will be made.”

Two days before Prime Minister Narendra Modi’s arrival, heavy rain lashed the Gwalior-Chambal region of Madhya Pradesh, casting a shadow over the cheetah programme. It was on Thursday that a final nod for the programme was given, after which preparations began in full swing.

On Friday, the narrow single-lane road leading to Kuno was jammed with heavy security. Posters and banners were put up 18 km outside the Tiktoli entry gate of Kuno celebrating the arrival of the cheetahs. A forest department staffer said: “We received these posters yesterday only but with heavy rains they were not put up.”

The PM is expected to arrive in Kuno in the morning and release the five female and three male cheetahs into two quarantine enclosures. He will interact with cheetah mitras, anganwadi women and forest personnel including cheetah caretakers. Saturday also happens to be the PM’s birthday.

After the cheetah programme, the PM will interact with women of self-help groups at another event in Karahal. More than 1.2 lakh women will be present at the venue.

Meanwhile, the Special Protection Group combed the roads and forests of Kuno while officials set up medical camps and water arrangements at parking spots. There were also rehearsals conducted for over two hours, including a helicopter landing trial at two of the five newly-created helipads.

A 20-km stretch of road leading from Kuno to the second venue at Karahal was paved with a fresh layer of tar. Signages demarcating roads constructed under PM Gram Sadak Yojana were also given a fresh coat of paint.

Over 5,000 police personnel from several districts along with two dozen IPS officers including DCPs, IGs and the DGP reached Sheopur to overview the preparations.
Ramesh Singh Sikharwar, a former dacoit who has now been roped in as a cheetah mitra, is among those who have been called to interact with the PM in Kuno .

Union ministers Narendra Singh Tomar and Jyotiraditya Scindia will attend the programme. Chief Minister Shivraj Singh Chouhan, who was to visit Sheopur on Friday, in a last-minute change decided to come directly on Saturday, before the PM arrives.

The sole hotel in Sheopur, with a capacity of 22 rooms, was taken over by the district administration to house senior state officials. Rest houses of the forest department and the district collectorate proved insufficient, forcing most officials to stay put in the adjoining Shivpuri district.