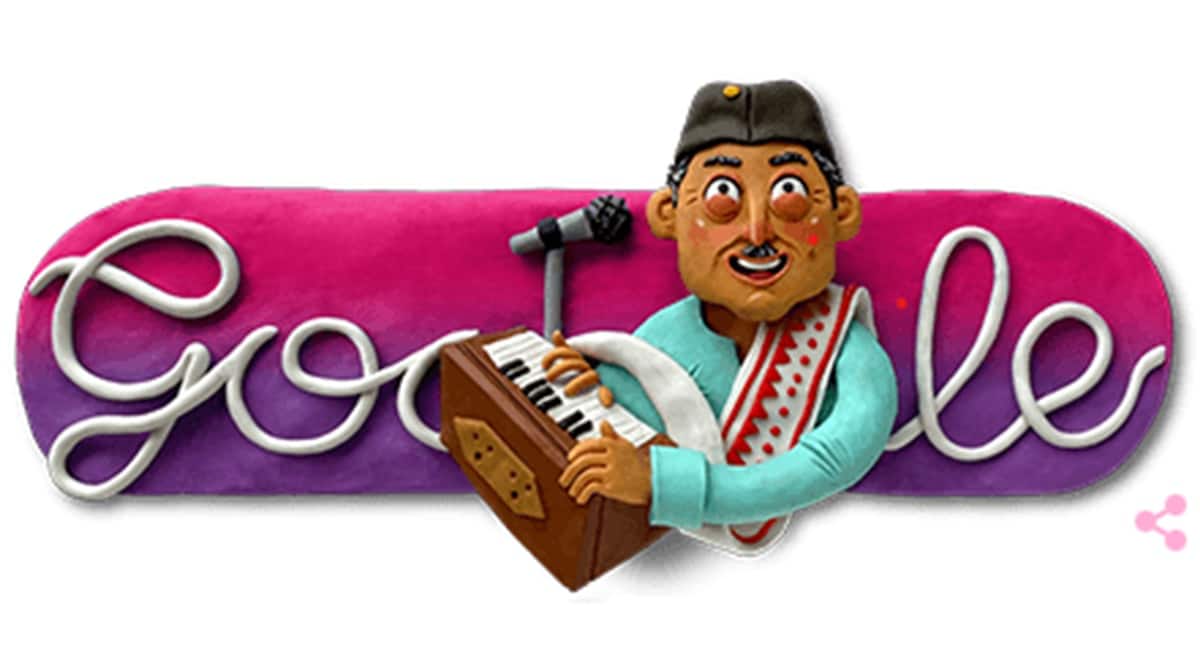 Google on Thursday paid tribute to Assamese playback singer Dr Bhupen Hazarika with a doodle on his 96th birth anniversary. Hazarika, who was born in Assam’s Tinsukia district on September 8, 1926 and died at 85 in Mumbai, was not only an exceptional singer who gifted India with countless evergreen songs in several languages, but also a poet, music composer, actor, journalist, author and film-maker.

In its tribute to Hazarika, also remembered as the ‘Bard of Brahmaputra’, Google Doodles shared the tribute doodle and said in a tweet, “Did you know Bhupen Hazarika was an Assamese-Indian child prodigy who began singing and composing music for film studios at just 12 years old!?”

Hazarika was also one of northeast India’s leading socio-cultural reformers, whose creations and compositions are known to have united people from all walks of life. Illustrated by Mumbai-based guest artist Rutuja Mali, Google’s artwork celebrates Hazarika’s work to popularise Assamese cinema and folk music.

Hailing from Assam, which was then home to several indigenous tribes, such as the Bodo, Karbi, Mising and Sonowal-Kacharis, Dr Hazarika grew up surrounded by songs and folk tales about life along the mighty Brahmaputra river.

Hazarika’s musical talents caught the attention of acclaimed artists early on. Renowned Assamese lyricist, Jyotiprasad Agarwala, and filmmaker, Bishnu Prasad Rabha spotted Hazarika’s talent and helped him record his first song, which launched his music career at the age of 10 years. By the time he was 12, Hazarika was writing and recording songs for two films: Indramalati: Kaxote Kolosi Loi, and Biswa Bijoy Naujawan.

He graduated with a master’s in political science from Banaras Hindu University in Varanasi in 1946, and went on to earn a PhD in mass communications from America’s Columbia University in 1952. Hazarika, at Columbia University, was greatly influenced by Paul Robeson who was a civil rights activist, following which he composed the famous songs ‘Bistirno Parore’ and ‘Ganga Behti Ho Kyun’ based on the imagery and theme of Robeson’s ‘Ol Man River’.

When Hazarika returned to India after completing his studies, he continued working on songs and films that popularised the Assamese culture on both national and international levels. Over the course of a six-decade career, Hazarika created numerous compositions. His songs narrated people’s stories about happiness and grief, of unity and courage, romance and loneliness, and even strife and determination.

He even served as chairman and director of numerous boards and associations, including India’s National Film Development Corporation.

Hazarika made several award-winning films like ‘Shakuntala Sur’ and ‘Pratidhwani’. His directorial ventures, which include ‘Lati-Ghati’, ‘Chik Mik Bijuli’, ‘For Whom the Sun Shines’ and ‘Mera Dharam Meri Maa’, gained wide appreciation. One of his major contributions to Hindi cinema was as a music director of a few outstanding films like ‘Arop’, ‘Ek Pal’ and ‘Rudaali’. In 1993, he won the ‘Best Music Director National Award’ for Rudaali, which features the famous song ‘Dil Hoom Hoom Kare’.

The legendary artist won several prestigious awards like the ​​Sangeet Natak Akademi Award, the Dadasaheb Phalke Award, Padma Shri and Padma Bhushan, for his outstanding contribution to music and culture. He was honoured posthumously with the Bharat Ratna, India’s highest civilian award, in 2019.