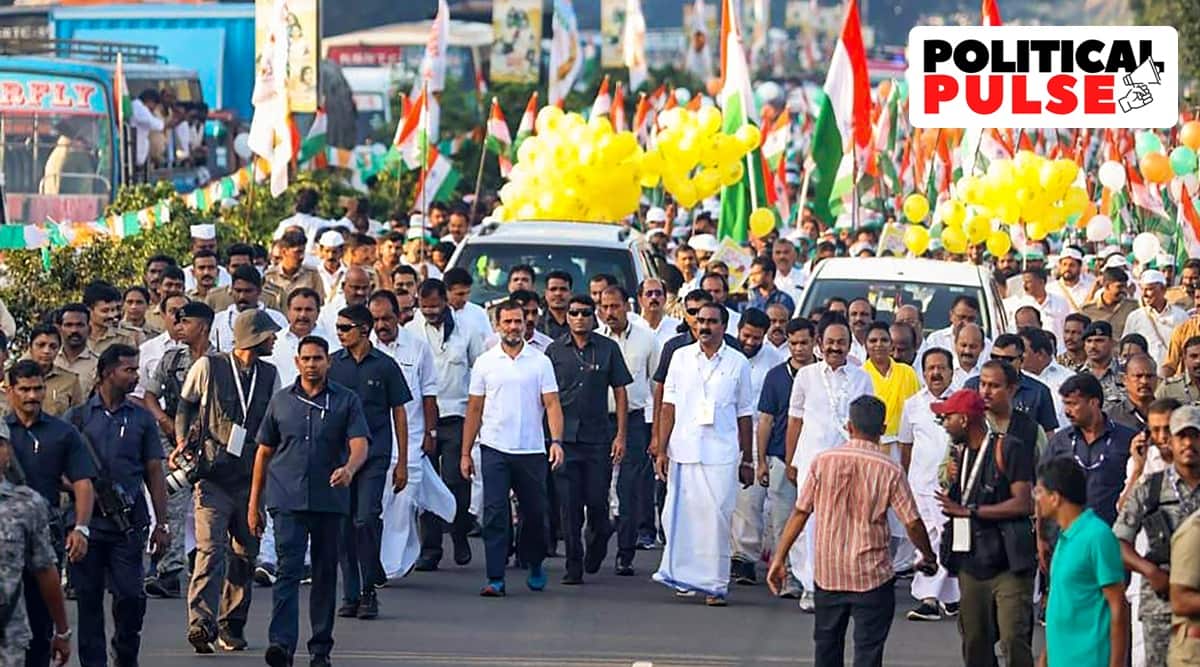 It’s 6 am and Desom junction in Kerala, 19 km from Kochi, resembles a police outpost. As the day unfolds, men clothed in white — Congress members — trickle in among the scores of police personnel. At 6.30, an announcement goes out, sparking a sudden flurry of activity: “Rahulji has left from Aluva UC College (the previous night’s campsite), he is arriving soon.”

Policemen pull out ropes from their vehicles to control the crowd, Congressmen bring in bundles of party flags, tricolour balloons start fluttering, and a few people pull on their knee sleeves. In no time, Desom is all set to kick-off the 15th day of the Bharat Jodo Yatra.

Rahul keeps the swelling crowd waiting for 15 minutes, before alighting in the midst of a teaming mass of Congress workers. Flanked by senior leaders, he starts marching.

The crowd grows as the yatra moves along the national highway. There are yatris for the Kerala days, for the two-day Ernakulam district stretch and for the day’s leg, apart from the 120-odd who will complete the full 151-day journey.

E Nisarudheen, a Youth Congress worker from Kollam says: “I have joined the yatra from Kanyakumari but have to stop at the Kerala-Tamil Nadu border. I am allowed only in the Kerala leg. I have requested the party to allow me to walk till Kashmir.”

Nisarudheen, who runs a catering firm, said many yatris including him felt strained during the initial days. “But things have changed now. We draw energy from the huge turnout of the people. Rahul takes care of all of us. Everyday, he interacts with us and looks into our welfare. We need not worry about any logistics. We wake up at 4 am and get ready for the day’s walk. All you need to do is to move your legs,” said the local Youth Congress leader at Kundara in Kollam.

Both sides of the road are splashed with banners and billboards of the yatra. There is only one face on the posters, and one name on the lips of the marching crowd: Rahul. Slogans which occasionally go up are not against the CPI(M) but against the BJP and its “divisive politics”. No slogan is raised for any Congress Kerala satrap, an otherwise ubiquitous practice at any party event.

Varun Alappad, a fisherman and Congress worker, has abandoned his work to join the yatra. “This is the best season for fish and making some money for the family. But I decided that I should join this yatra for the cause of the country and its future. I being the lone breadwinner, my family is not happy with the idea.”